After saying our goodbye to little Megsy in Serbia, Jase and I caught a cab back to the bus station that we first arrived at, with Kosovo next in our sights. This time it took about 3 minutes (about 15 minutes shorter than it took us to get to our hostel) and cost a third of the price we had originally paid..bonus! Unlike all other bus stations this one seemed to have more security. While it may have always been this way, we sensed this may have increased as a result of the Syrian Refugee Crisis and the daily growing number of people trying to pass through countries like Serbia.

While we didn’t see masses of people on foot trying to walk across the border as shown in the news we did see alot of people camping around the bus station, setting up what looked like medium term but still essentially temporary homes. We also saw large numbers of people paying to get on buses to travel across the border. What became clear is that the Syrian Refugee Crisis impacted people of all situations, education and wealth backgrounds.

I thought alot about what it might be like to be in the shoes of those currently in or making their way from Syria across Europe. I found it very hard to imagine working your whole life for something, or living in a place, only to have it taken away, and then perhaps having to spend the last of your savings on bus tickets trying to get to a safer place. For me, I was just passing through to get to my next destination, silently noting the bad air con but comfy seats. But really, neither of those things matter. I have two passports that allow me to live and work in safe places, and provide the platform for me to do much more. These people are just trying to get to a place where their lives are not in danger. Everyday I have been on this trip I remind myself how lucky we are.

The five hour journey to Pristina in Kosovo was pleasant. We made friends with a man that sat across from us. While he talked to us mostly in Albanian, with the few words of English he knew he kindly translated how much time we had during breaks off the bus, and even hailed us a cab into the city of Pristina when we arrived.  Here’s a quick clip Jase took of the terrain coming into Kosovo.

On the way in, the cab driver understood we had spotted the large Bill Clinton billboard covering the side of a building. “Bill! Bill!” he shouted. Before we knew it, he had careered across four highway lanes  gesturing we should jump out and take a photo. Pulled off on the side of a busy road, a nearby tourist got this pic of Jase next to the statue of old mate Bill the hero. This was our first taste of what our friend Avi had told us about, which was Kosovo’s appreciation for the United States, and in particular Bill Clinton. This love for Bill dates back to the late 90’s when Kosovo was invaded by the former Yugoslavia (then made up of Serbia and Montenegro). The Americans showed their support through NATO airstrikes on Serbian forces. The neighbouring Albanians provided military support on the ground.

We stayed in one of the main hostels in Pristina. It was a pleasant city that was super hyped about its neighbour Albania being in a soccer match against Norway. Using projectors as makeshift tv screens, the soccer was cast onto walls everywhere. That night we got some super spicy Thai at a nearby restaurant and retired to bed early.

The next day, we headed to Peja by bus. Once we arrived we spoke to a travel agent who ordered us a 1 euro cab to a hotel she said was about 10 euro a night each – perfect we thought. Perhaps this guy was hoping to make an extra buck off us but he said nowhere in Peja would charge under 50 euro. It seemed there was quite a disparity between the price of accommodation versus the cost of cabs in Kosovan cities.

Over beer and tea, we dwelled on spending 50 euro a night. We fleetingly considered what Avi had told us about Kosovans being hospitable and that if you asked a local for water they would likely invite you in for a meal and maybe a place to stay. After deliberating we decided to YOLO (yolo has now become a verb in our vocab). We ended up spending 70 euro a night and stayed at the most exclusive place in town! Hello Hotel Dukagjini! The prospect of feeling like ballers and basking in luxury won out. We wallowed in white robes for the next 2 days, enjoyed the lush buffet breakfast, and ate fresh salads, veg lasagnes and steaks at the hotel’s restaurant.

In our chats with Avi he agreed with the commonly held thought that the Americans wanted to destabilise any momentum the region had of becoming entirely communist. However he also thought the US had other, potentially more motivating reasons for maintaining a presence in the region, including to have an ongoing base to gather intelligence from. The standard joke was that the country was now run from the suburb where the American Ambassador to Kosovo lived, Dragodan. Basically he said that if you want to get anything done politically, you need to ask the Americans for permission.

Avi also had a view that the former Yugoslavia days were better in a way. Everyone had somewhere to sleep, the means to get an education and a car to drive around in. Any one of these things may not have been top quality, but everybody had access to them.

After speaking with the Tourist Information Centre, the hotel owner of our next stay came to pick us up. Richard was a local Kosovan who bought his friend Geant along who was visiting from neighbouring Albania. The two had previously met online playing a computer game. Geant spoke English so he translated alot and hung out with us when Richard was working.

The drive to the Te Liqueni Motel & Restaurant in the Rugova Mountains (located in the north-west of Peja) was very windy. We felt every corner as Richard zoomed around the hills, likely having driven the route quite often to get supplies. When we arrived to see two rows of log cabins nestled among a beautiful forest at the bottom of a mountain, we knew we were in for a great few days. The mountains seemed anything but its other commonly referred name, The Cursed Mountains. 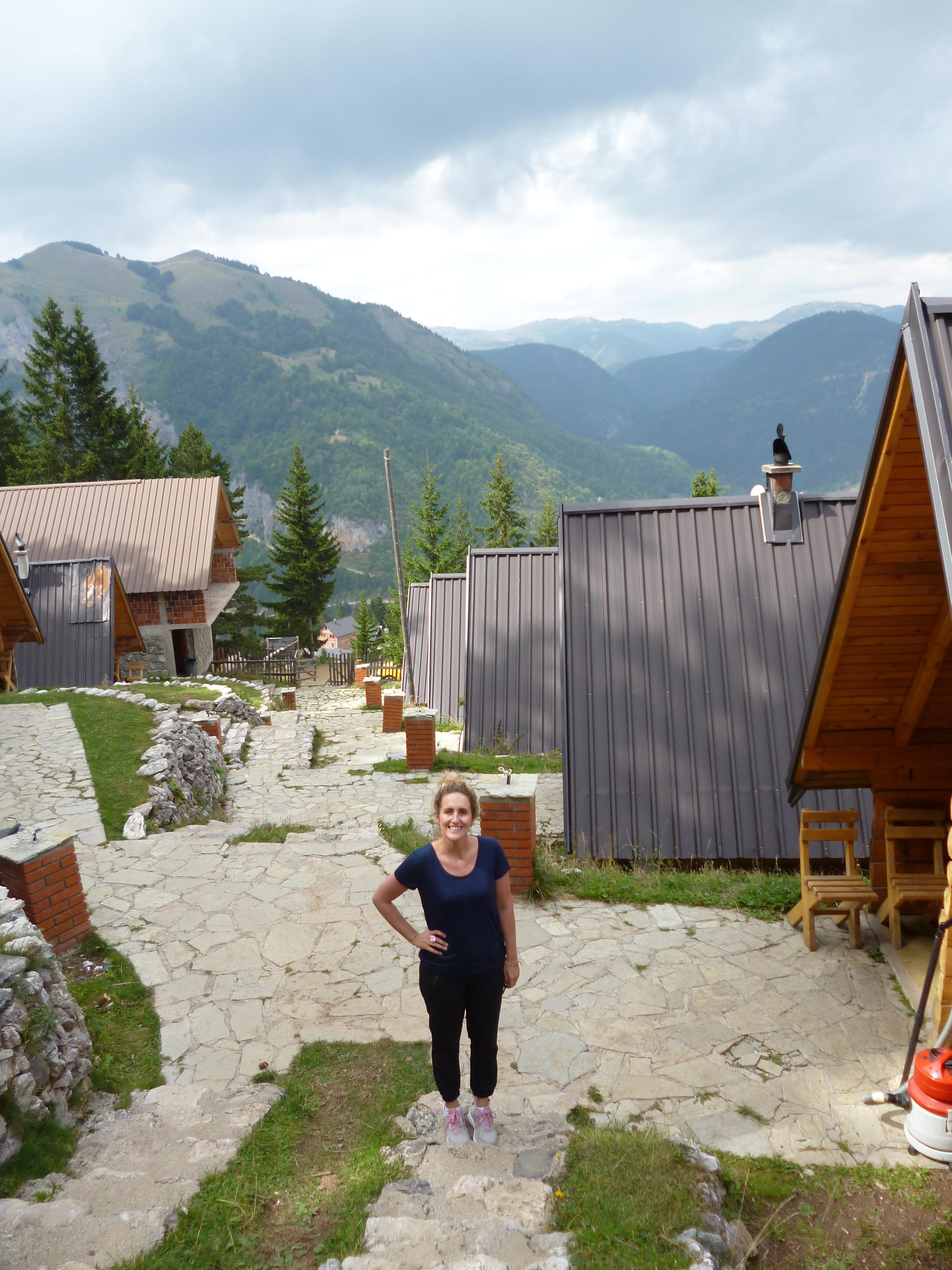 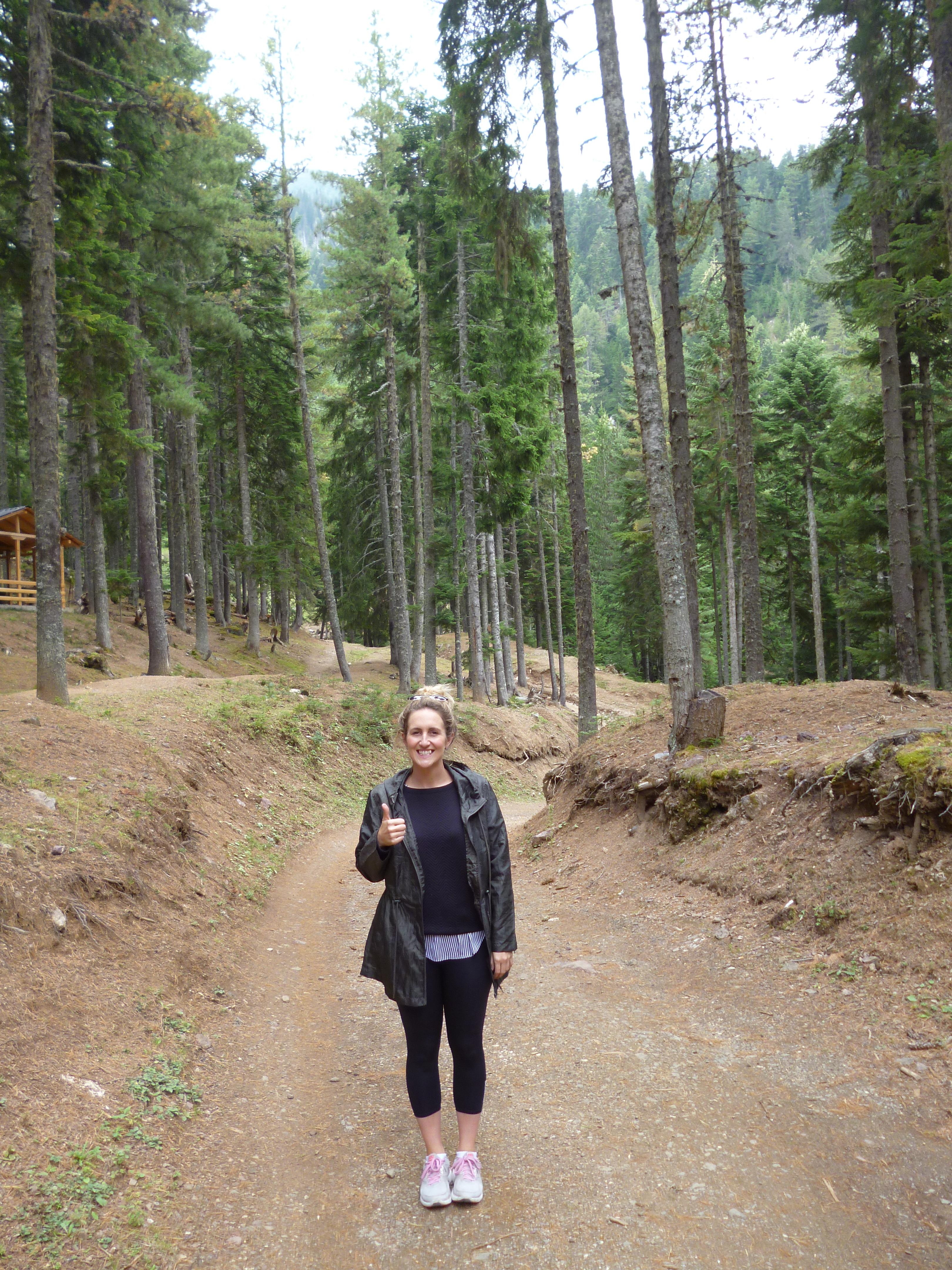 After settling in to our room, we headed up to the restaurant for some more Montenegran vino and dinnner. The next day was a lazy day that we mostly spent rugged up in the restaurant/lounge area blogging and drinking tea. In the afternoon we visited Daisy the Cow and went for a brief walk around the property. Here’s a silly clip of just this. 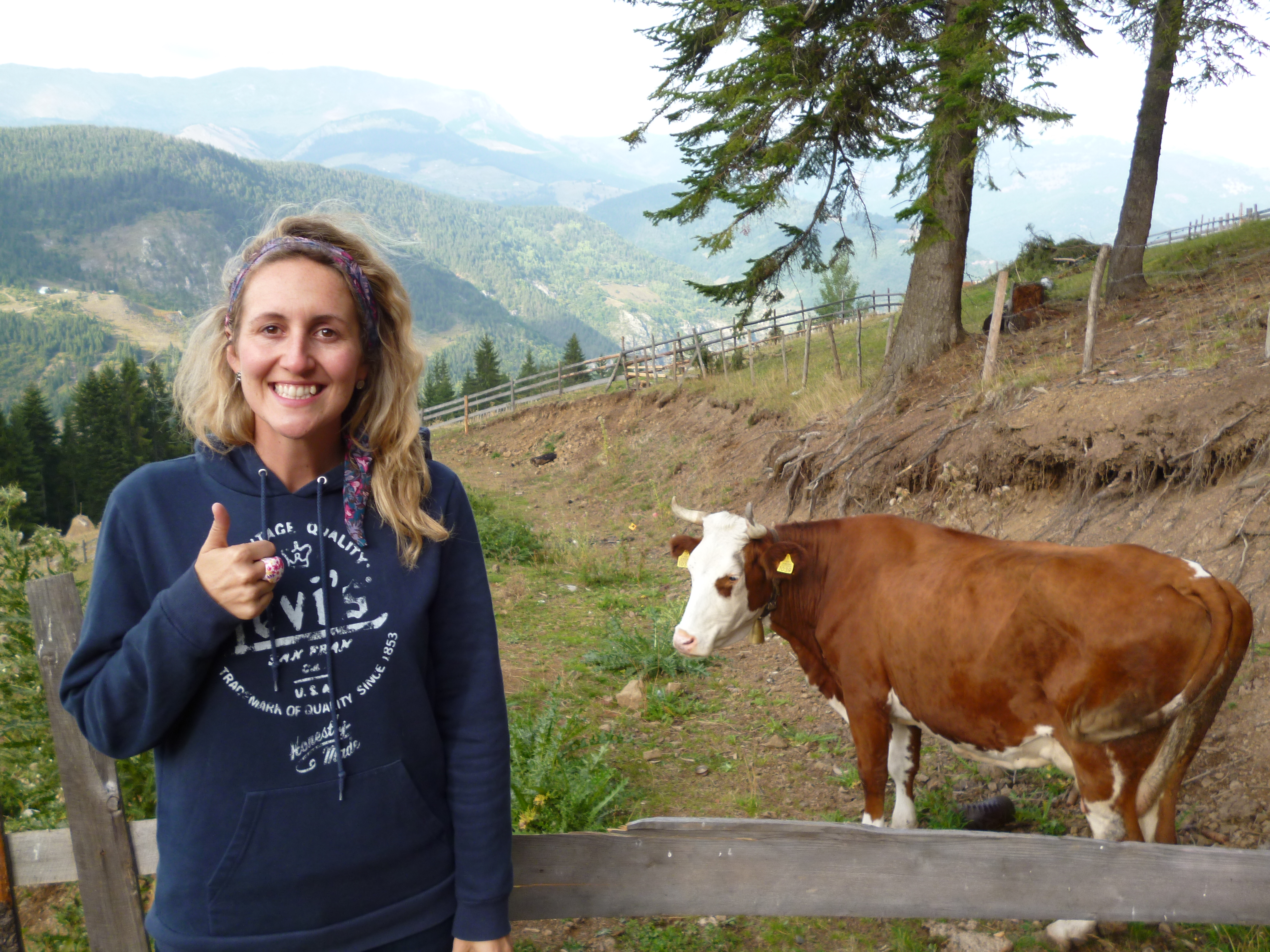 For our second full day we went for a walk up the mountain. At the top, Jase and Geant lit a fire and we sat around it for a bit before trekking back. 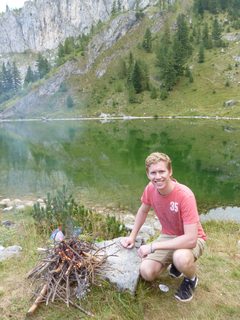 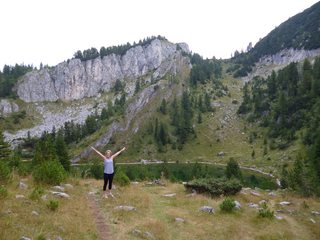 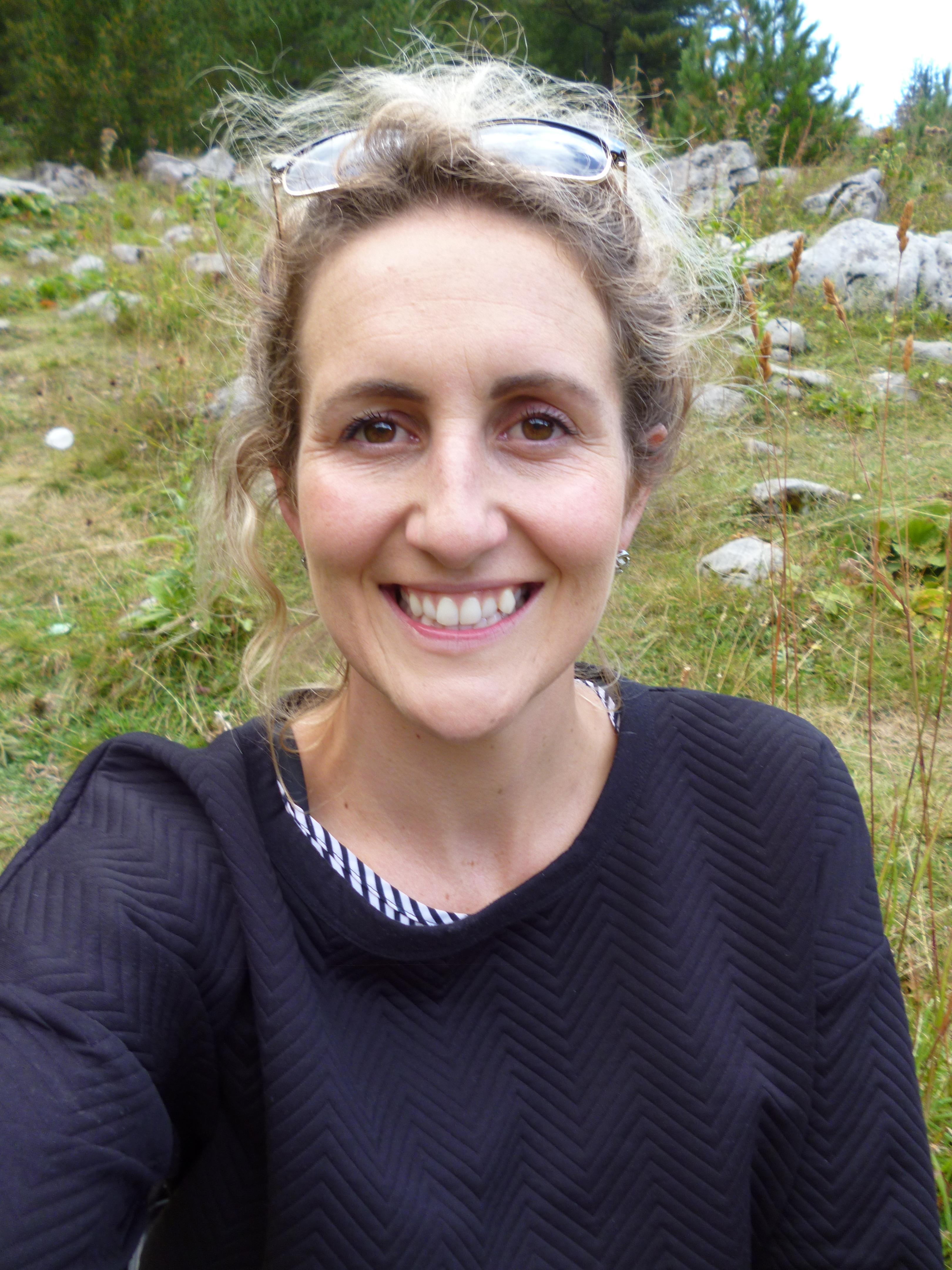 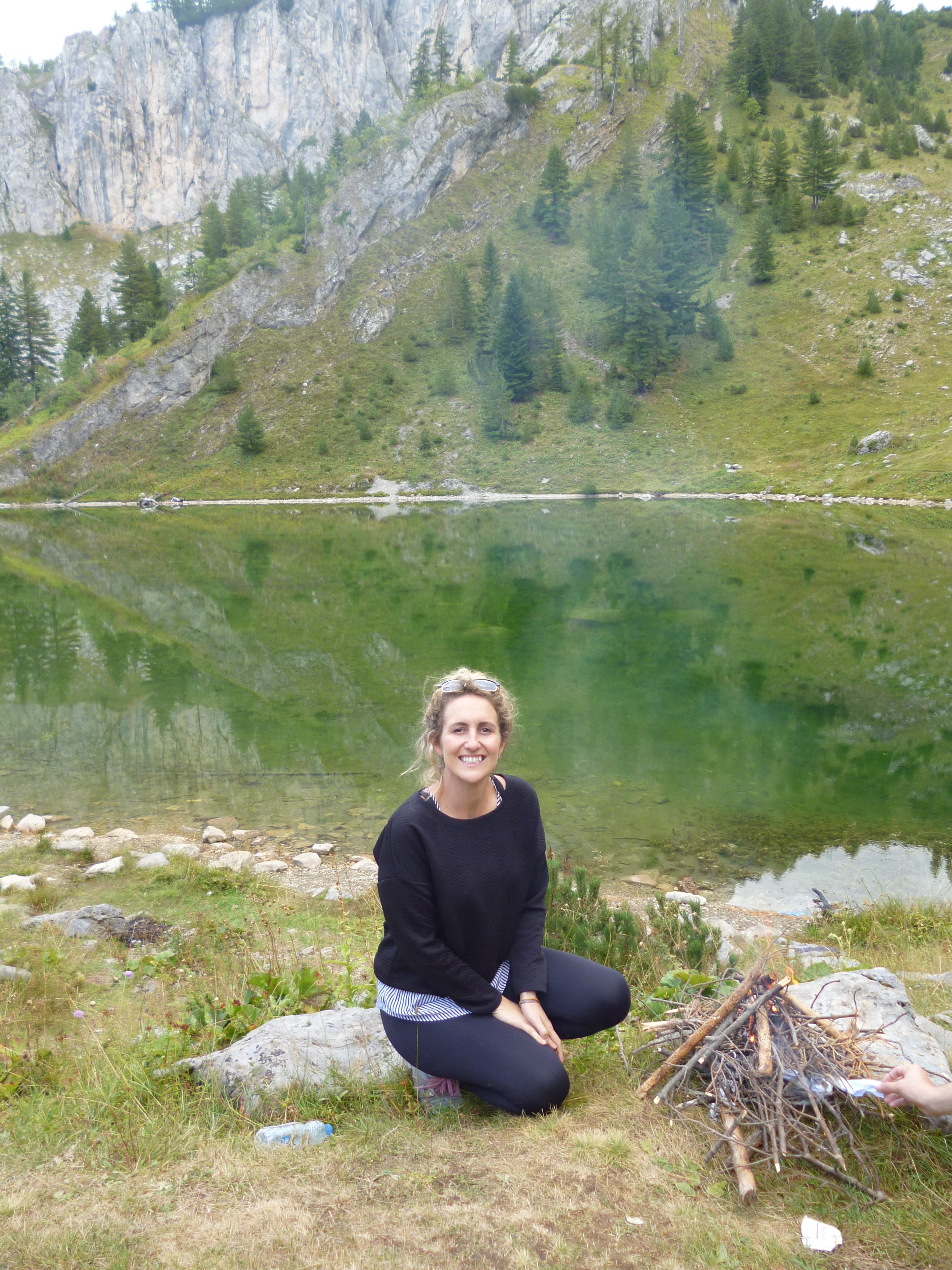 At dinner we tried a traditional Kosovan bread dish called Flea that went well with veggie soup. Geant and Richard counted down the hours until the launch of the new Apple iPhone. Quite literally too, having opened up the countdown timer on the Apple website, asking me to check it every 20 minutes, until a live stream of the product launch popped up which they watched for the next hour and a half. It was amazing to me, as a new iPhone edition didn’t exactly thrill me let alone to count down the minutes to its release. But hey, everyone has their thrills!

The Rugova Mountains had a real charm. You felt like you really were breathing in the freshest air. We left the next morning feeling relaxed yet energised for our next adventure – lucky, as we had to be up at 3.30am. Richard was dropping Geant at the bus station and offered us a lift. We drove the same windy hills back, but this time it felt even faster as he said we only just had enough time to get there. With two minutes to spare we made it, and were on our way to spend 5 nights on the coast of the Albanian Riviera! 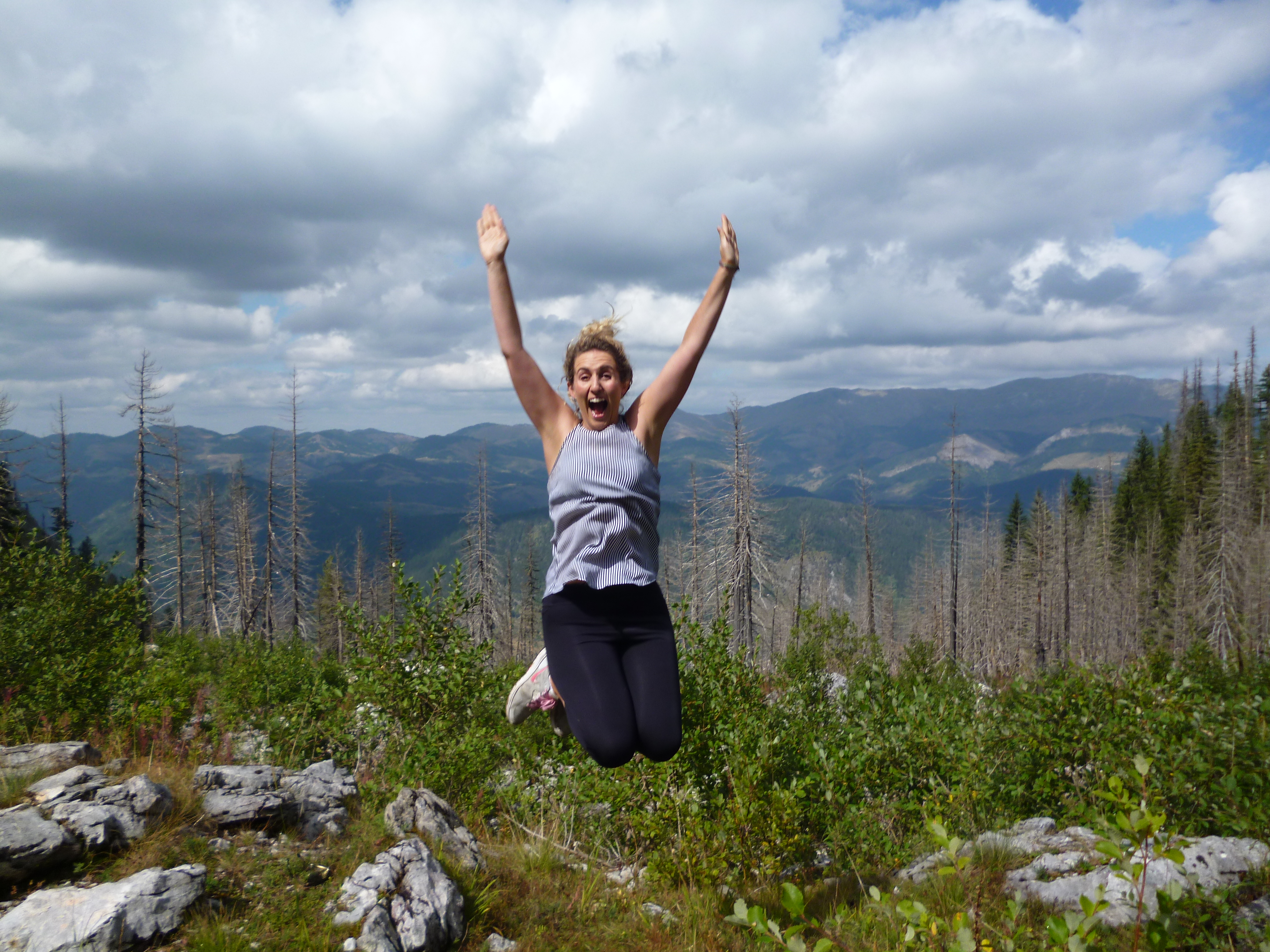