On our way to Sarande we stopped to change buses in the capital of Albania, Tirana. It was heavily raining when we got there but we managed to catch a taxi to the correct bus station with the help of Geant, and a female friend of his he ran into in the street. She was very helpful considering it was about 10.30am and she had just woken up and was super late for work. We ordered some snacks for the trip and chatted to a couple who had just started up their first hostel, before setting off on our journey again.

We arrived in Sarande in the afternoon and walked around a bit before we asked a restaurateur where our apartments were. He called the owner who promptly picked us up with his 15 year old son who spoke English so well he casually dropped in Aussie slang words and mentioned we were from “the land that spends Christmas Day at the beach.” Our apartment for $7 AUD each a night was simple but great value. It had a large double bed, kitchen, lounge room and a balcony overlooking the coastline.

Our first full day in Sarande was fairly relaxed. I went for a walk along the broad water and had a coffee by the ocean. Jase enjoyed the cool temperatures of the air con and watched the Aussies smash the Poms in the cricket. It did take me a while to get back to our apartment, the cab driver knew everywhere in town except where we were staying, apparently our apartments were new and not on any maps or local knowledge radar. I ended up paying him money, and found it myself by walking back with groceries, telling myself this is good exercise!

In the morning on our second day I went to a local Albanian hairdresser named Jenny who said she could do my foils for 16 euros. A hairdresser down the road offered to do my hair for the equivalent of 4 euro however I opted for Jenny as she held up some foils as if she knew what I was talking about. Two hours later I was a fluorescent yellow banana head! The natural brown foils that were meant to accompany the blonde foils must have been lost in translation. Jenny seemed so lovely and eager to please that I paid her the money, thanked her and walked back to our apartment with my Lisa Simpson do wondering when I’d be able to get it fixed. Lesson learnt – never pay 16 euro for a head of foils to someone if you can’t communicate in their language to find out if they understood what you meant!

Still shining with a yellow beacon on my head, we decided to familiarize ourselves with the Sarande riviera/ marina. We had a coffee and a treat, and enjoyed the views. 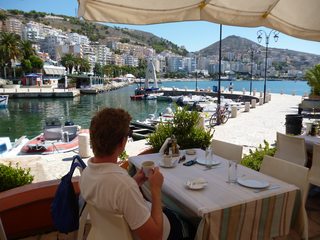 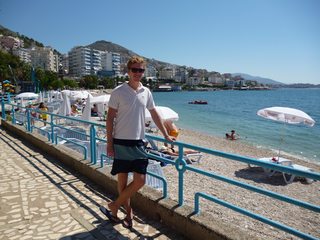 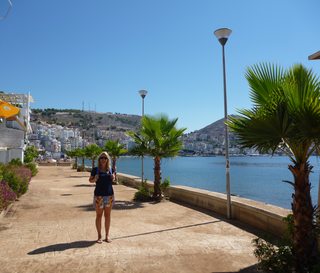 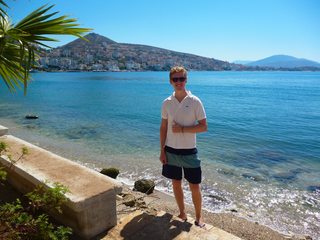 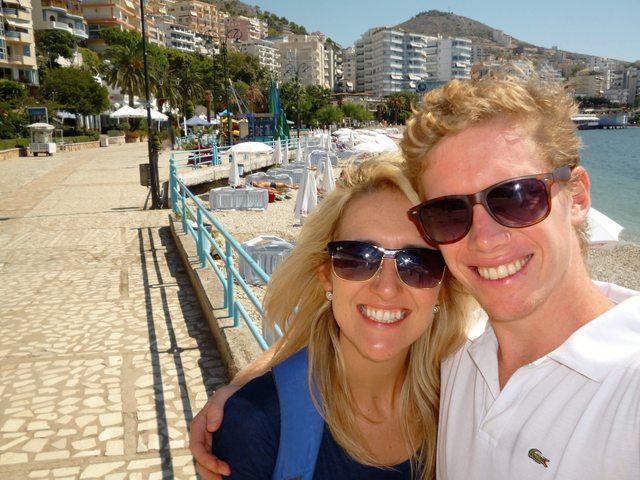 We wanted to enjoy some of the more secluded beaches, so decided to catch a taxi to Ksamil Beach. It was absolutely stunning water and perhaps even more beautiful than in the photos. We spent the afternoon there and enjoyed a pretty nice beachside lunch. 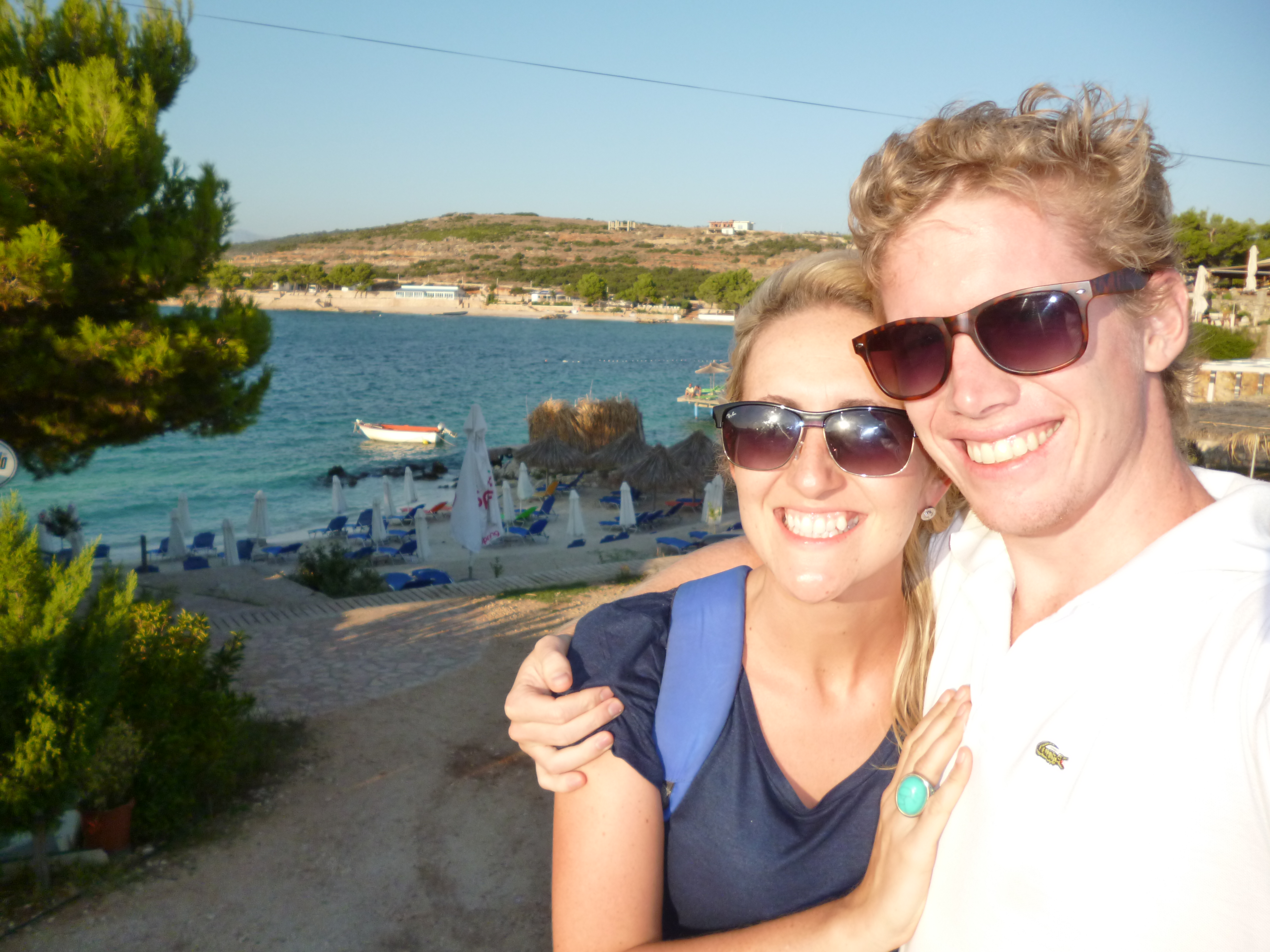 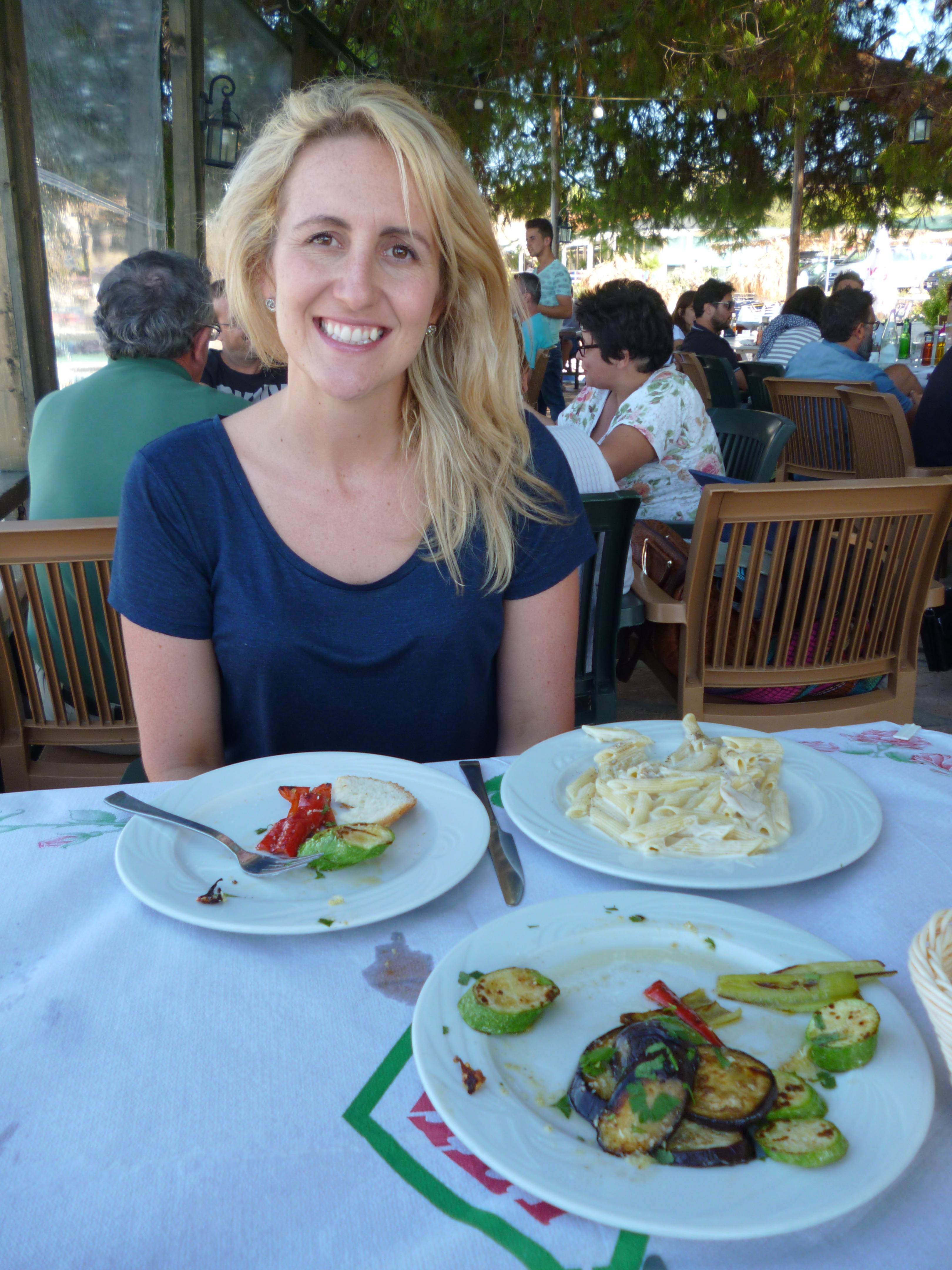 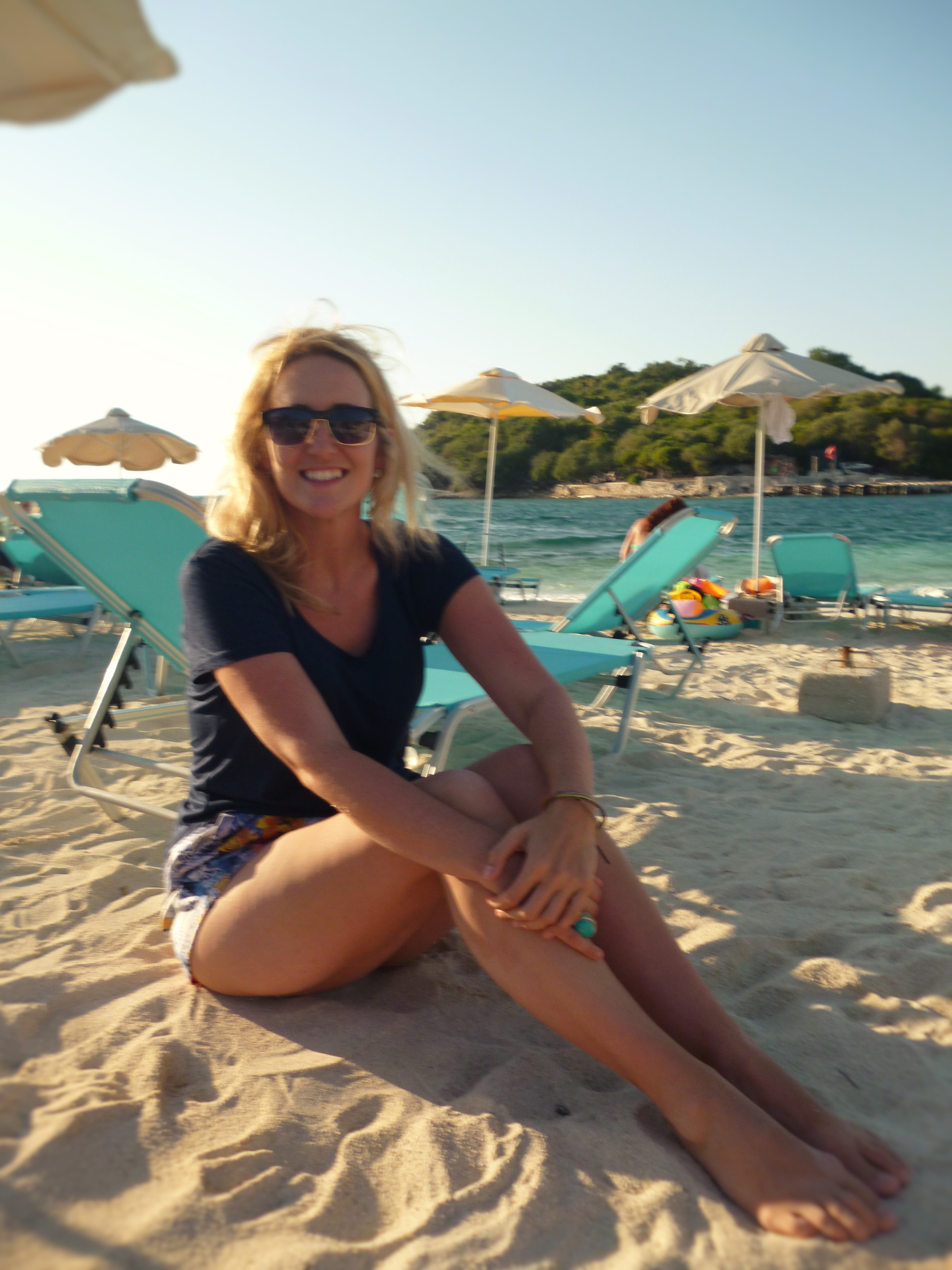 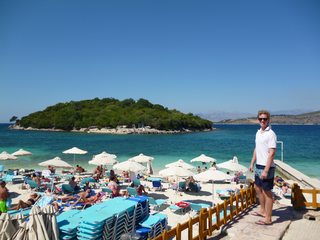 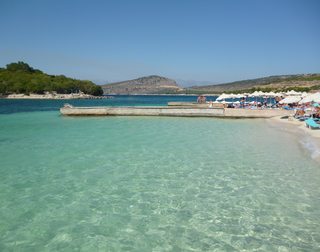 I feel we were lucky to visit Albania at a time when most of its beaches are relatively untouched. I am confident that one day this region of Albania will be a thriving tourist destination, especially given it’s people are very receptive to new comers. What has been a common theme for me when meeting new people on our travels, is that the less people seem to have, the more generous and friendly they are. Similar to the Bosnians, the Albanians were openly helpful on the street, and genuinely interested in making us feel welcome.

For our third day we hired a car and headed for a small secluded beach called Monateri, recommended by our friend from the Rugova Mountains. Again, another beautiful beach but this time with cows, chickens, goats, cats and dogs roaming around. 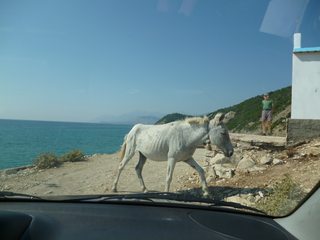 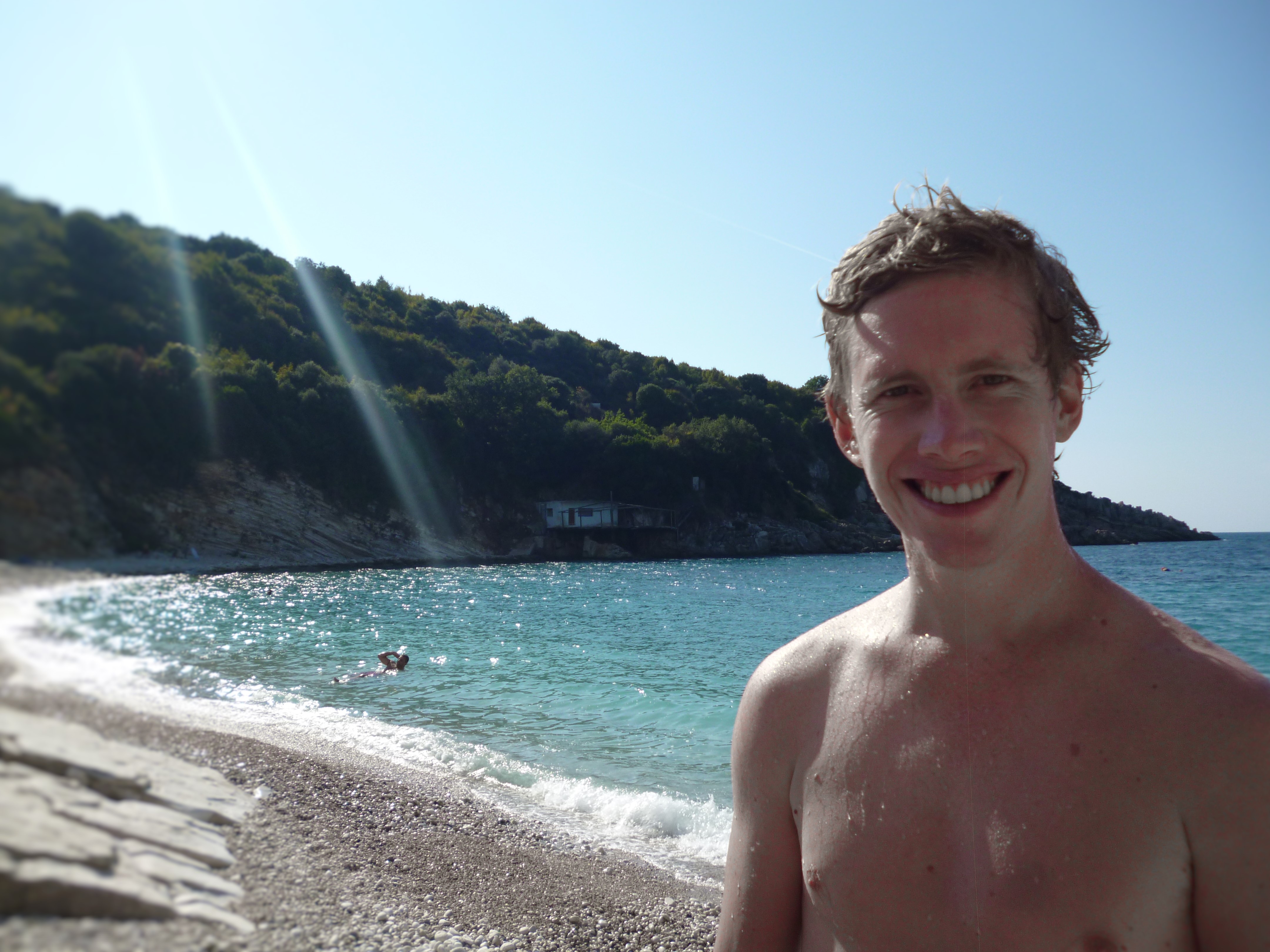 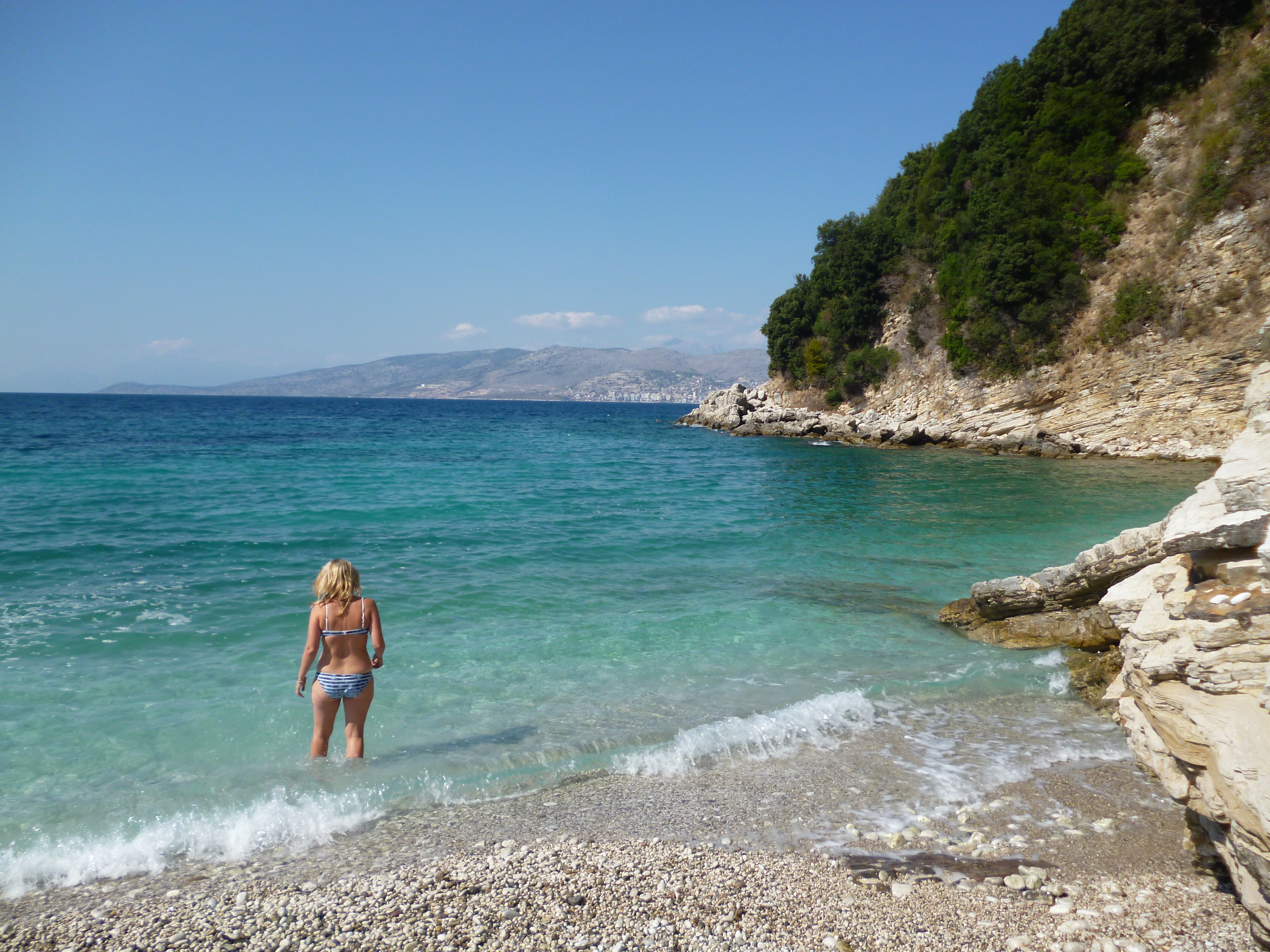 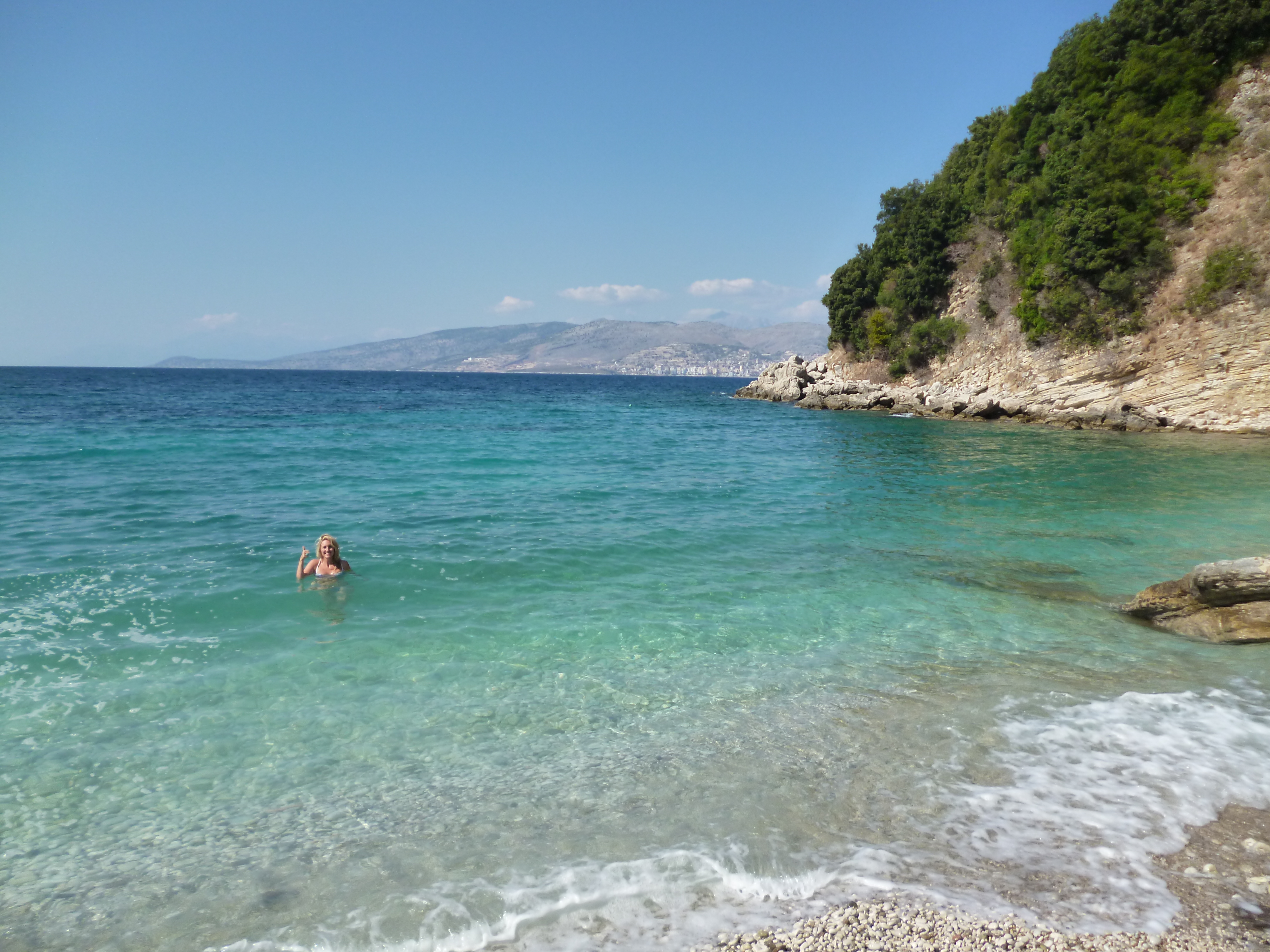 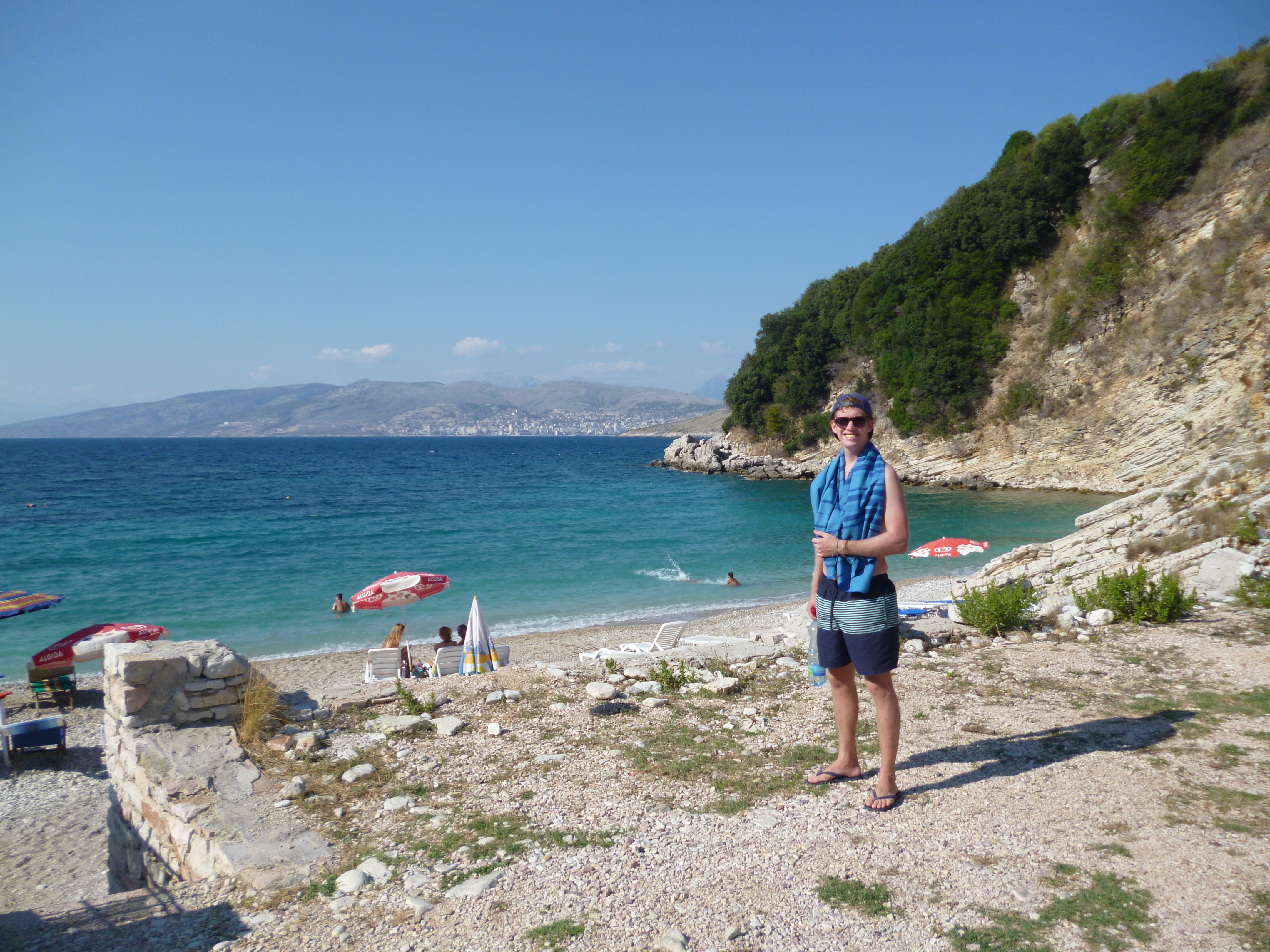 In the afternoon we drove out to the most well known attraction in Sarande, the Blue Eye. The Blue Eye (Syri i kalter) is a natural spring that bubbles from the underground and is the source of water for a large lake that sprawls for miles. The bubbling of the water creates the illusion of a blue eye with an inner black pupil. We had some lunch at the restaurant that runs alongside the river (who made sure we ordered meals before letting us use the bathroom). Afterwards we spent some time admiring the Blue Eye’s beauty and stocking up our drink bottles of fresh water, before driving back to the unit. Here are some snaps/ video below. 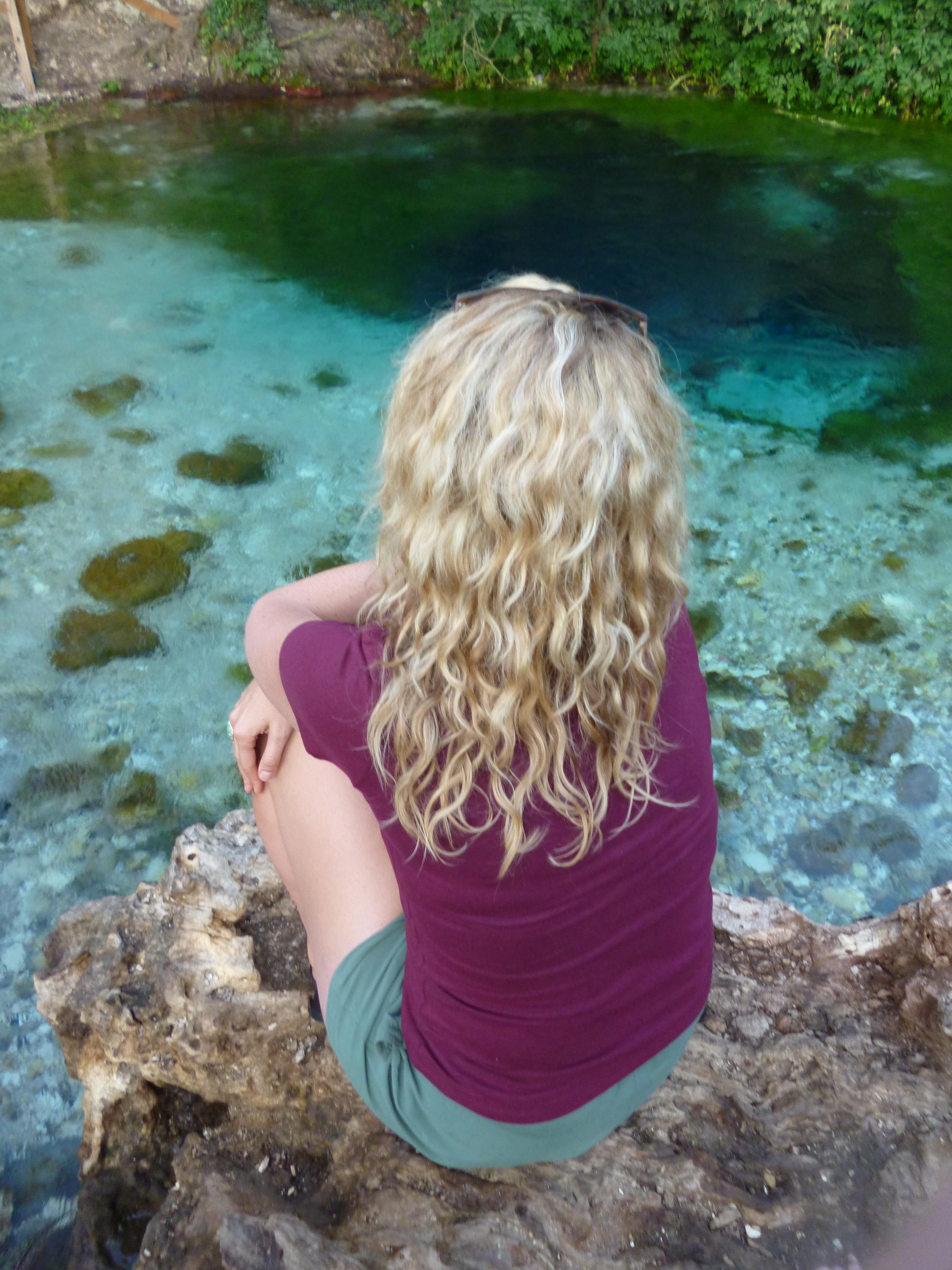 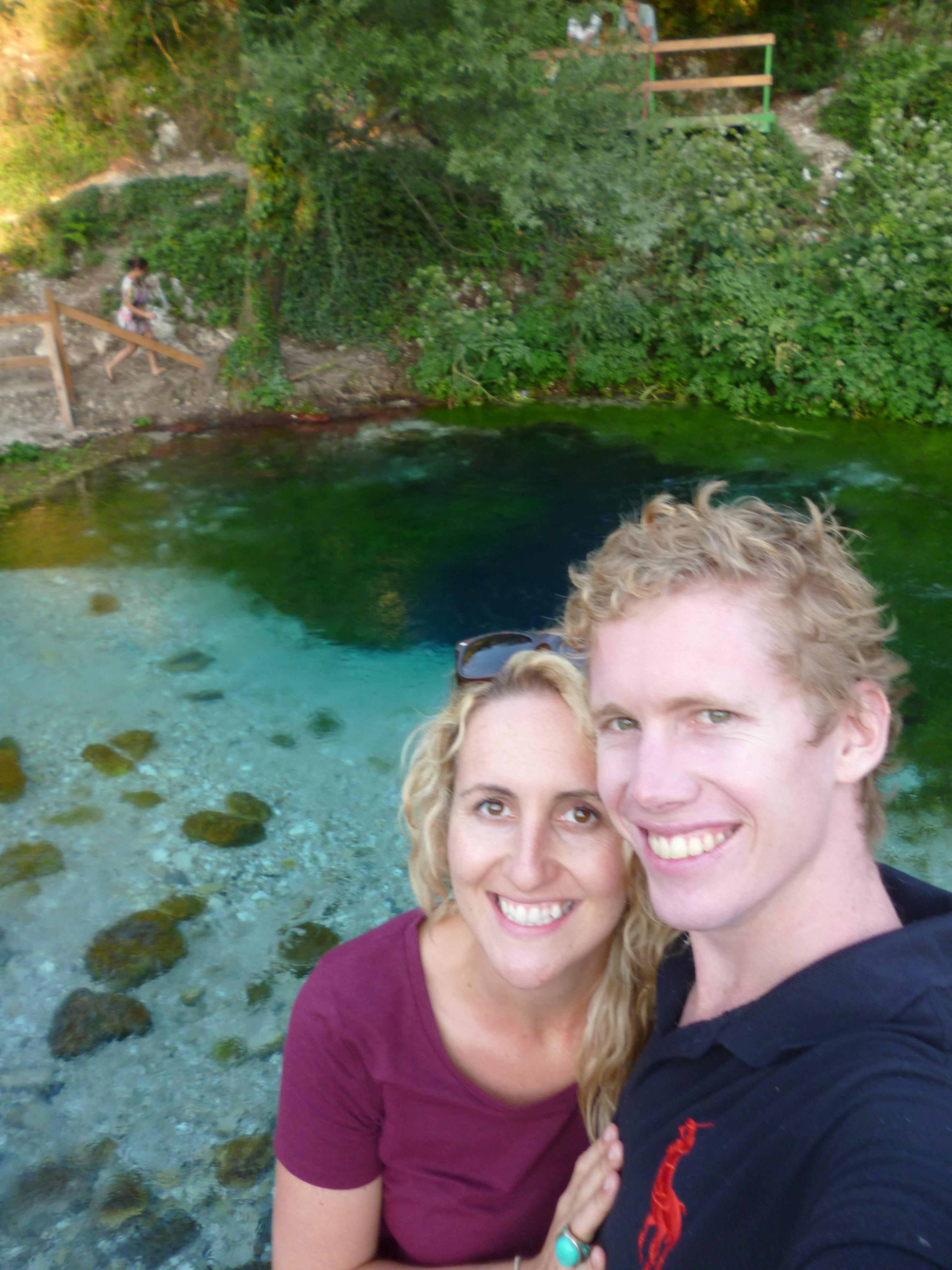 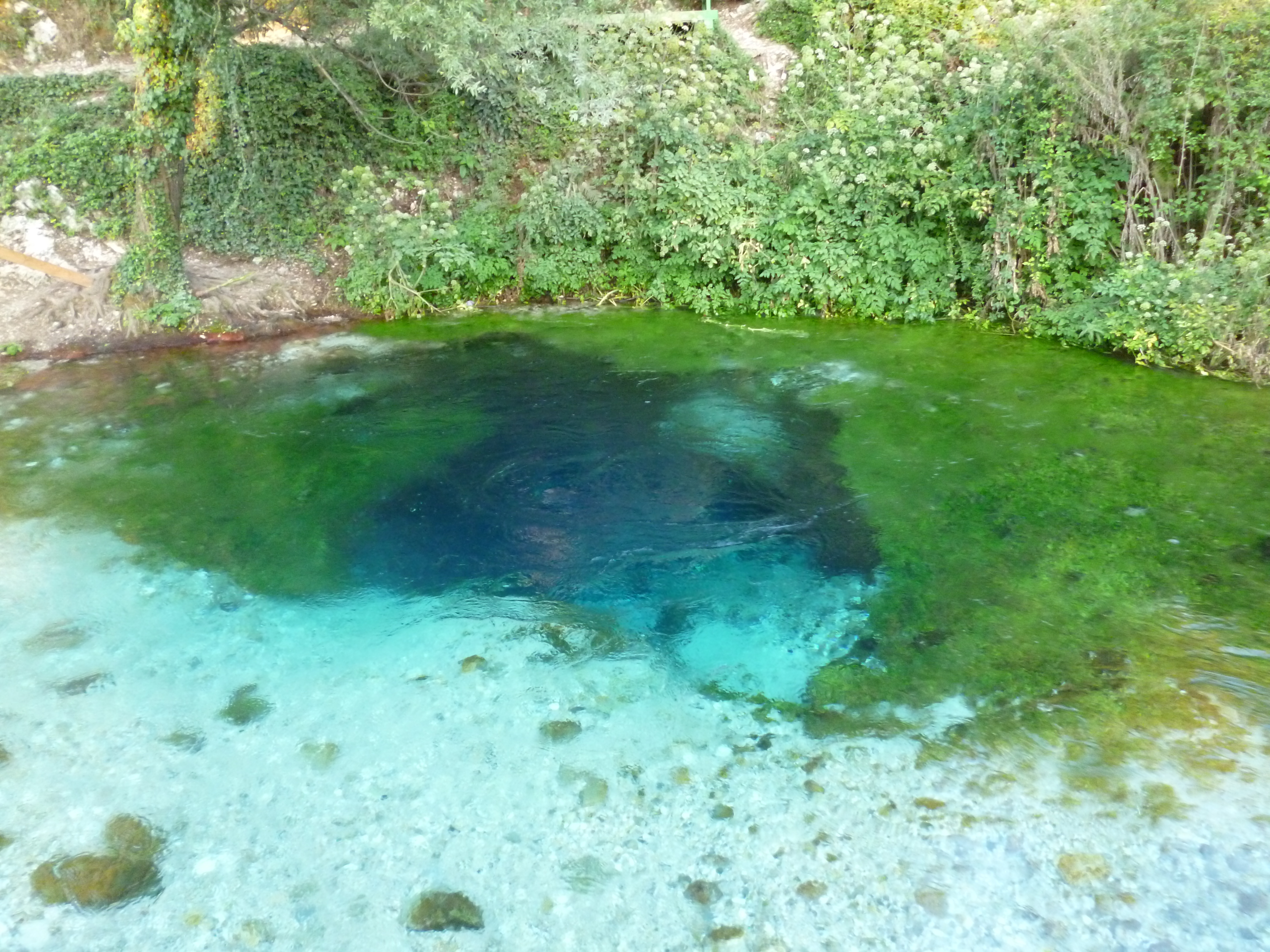 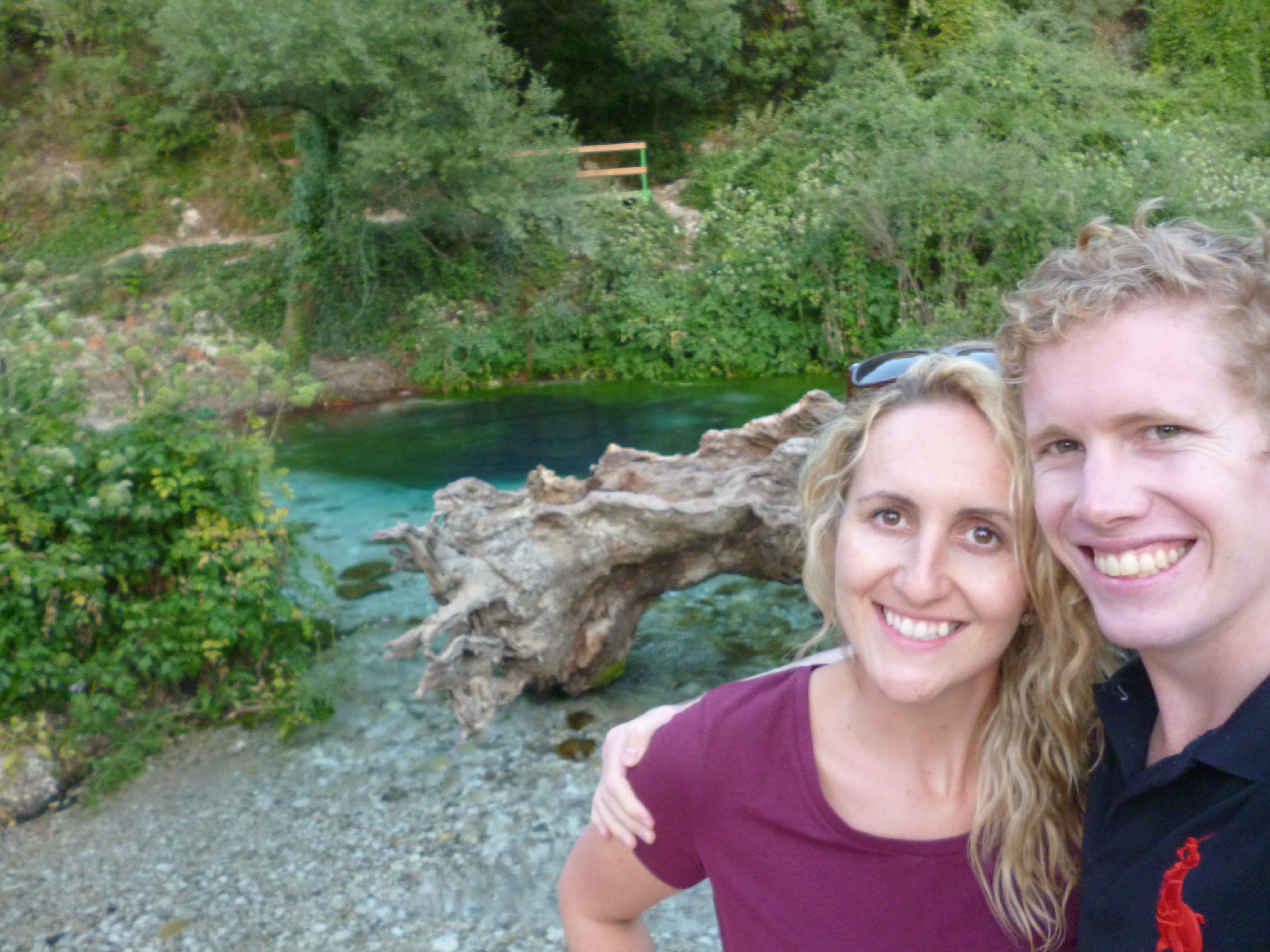 Our car hire was 35 euro for two days. Given there was no paperwork, the small price we paid and the casual demeanour of the sales guy, we waited for something to go wrong. While the car handover was smooth (they didn’t even check the car, just sent us off with a smile), we got a taste of just how relaxed Albanians are. Jase drove down a one way street and it wasn’t until we had almost no spare space on each side of the car, squeezing past 6 cars that a pedestrian casually signaled to us we had gone down a one way street! No road rage, no angry looks from any of the other cars, just one guy casually pointing out we had gone up a major road the wrong way! 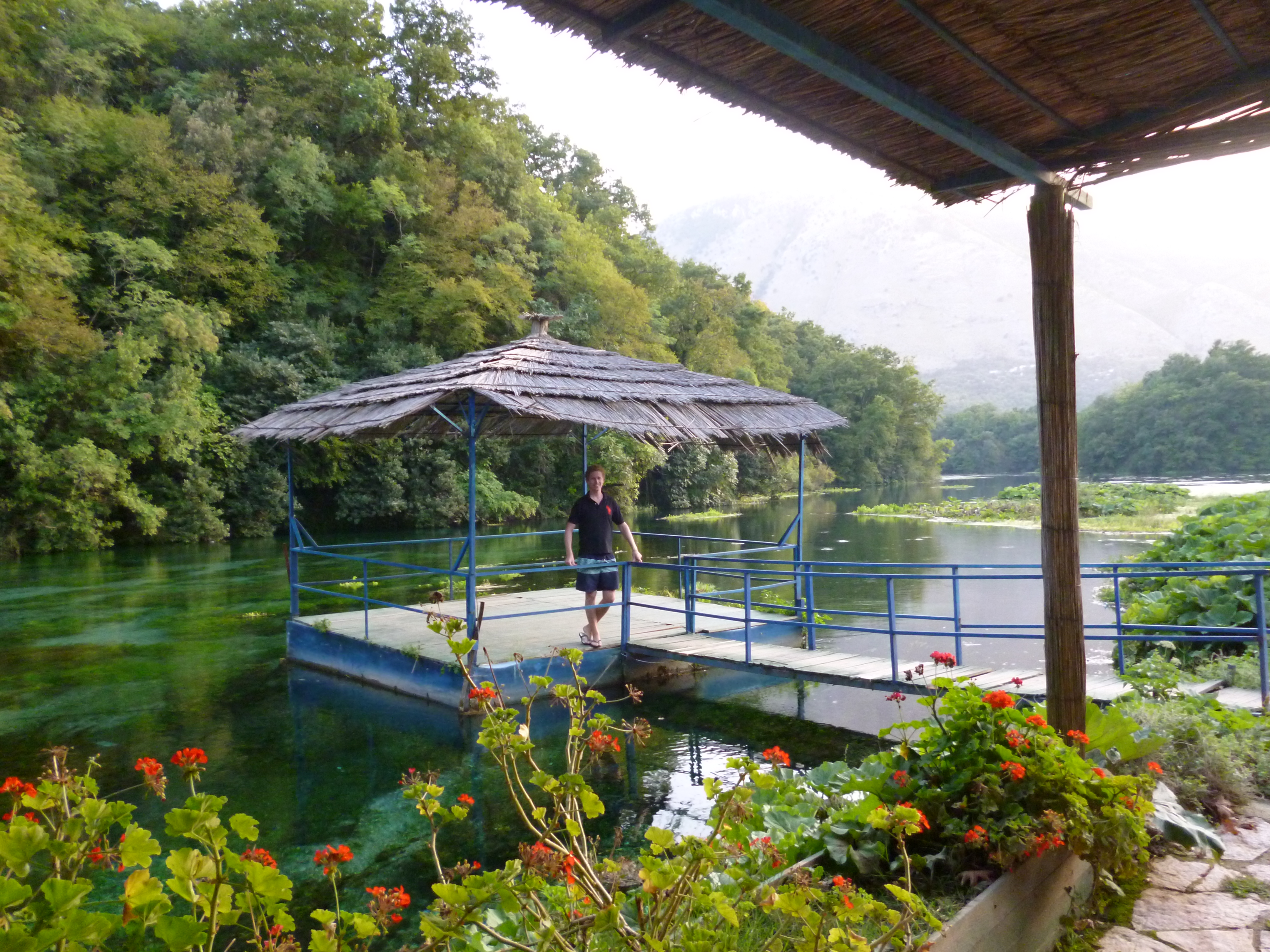 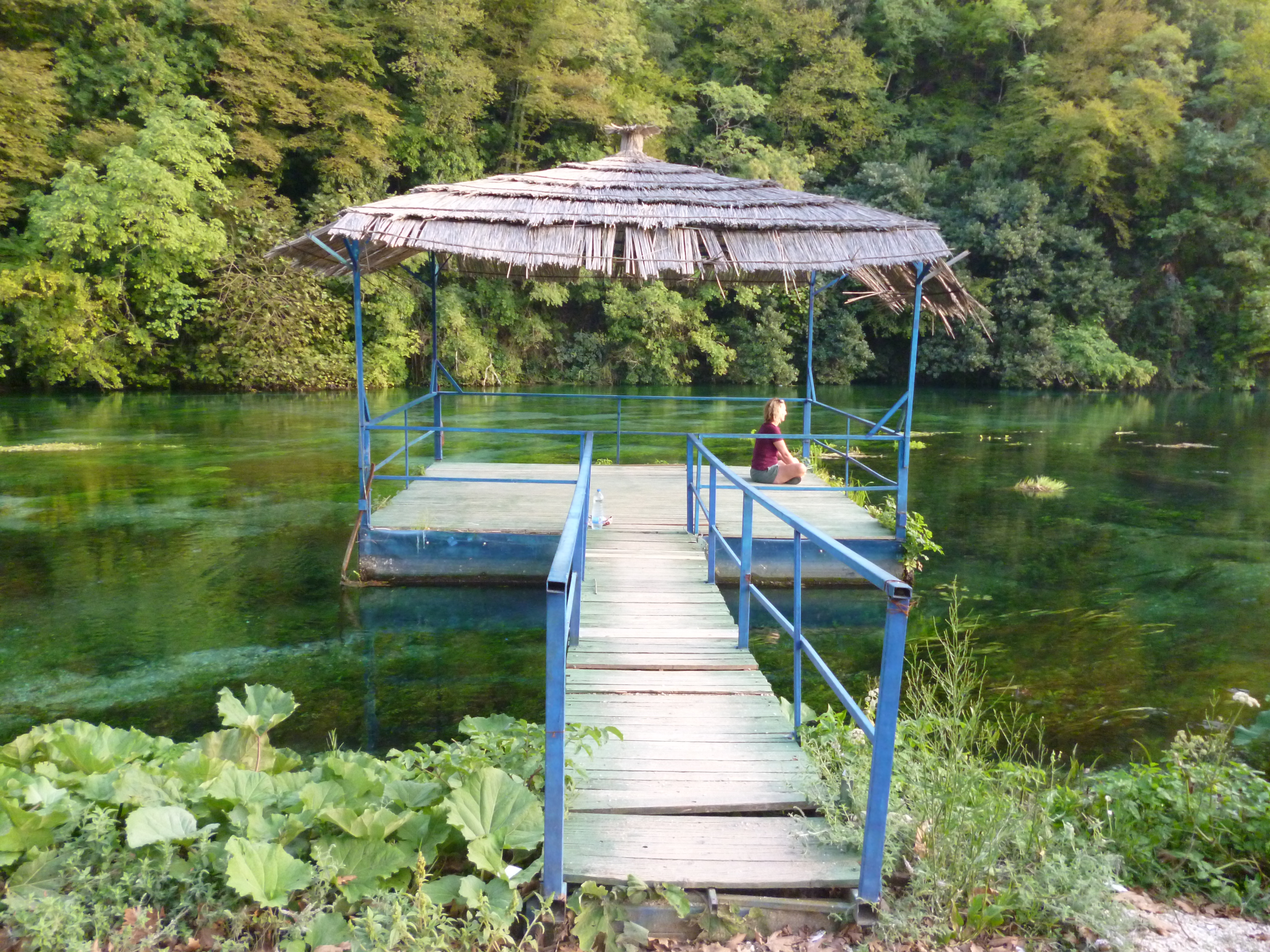 On our fourth day in Albania we drove the car along the windy coastline, stopping first at Lukova beach. You get to the beaches along this particular part of the coastline by spotting a sign and then driving down off the main road, for about a kilometre. There were many deserted huts and umbrella holder stumps (used during peak periods in the summer time) on what is otherwise a beautiful beach with pristine crystal clear water that was the perfect temperature for swimming and a spot of skinny dipping! 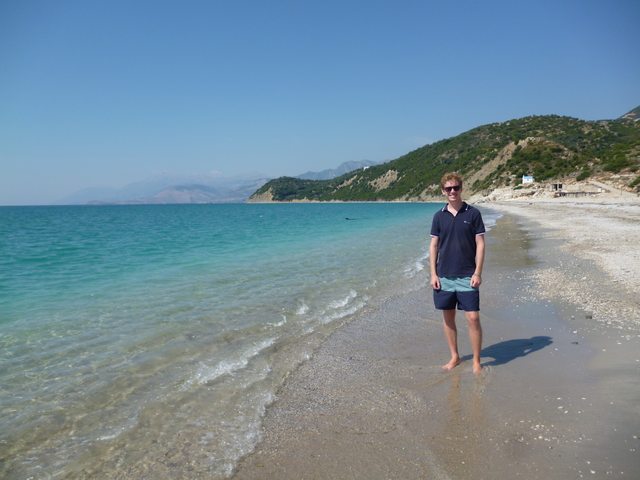 One of my favourite things about this day was what I call the ‘Sheep Highways’. You are cruising along what appears to be a main road and then nek minute your car is surrounded by a hundred Sheep.

Our final stop for the day was at Borsch Beach, where we spent the afternoon enjoying our packed lunch and given there was not a sole for miles – a second spot of skinny dipping! Feeling chuffed with giving our normally white backsides a bit of sun, we went to the supermarket to buy food and then we headed back to our apartment and cooked up a storm for dinner. What Jase thought was particularly quirky was being able to buy eggs-by-the-egg at the supermarket! 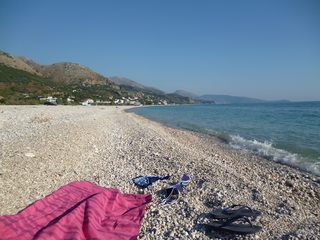 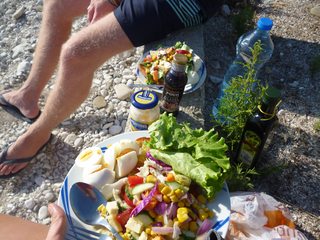 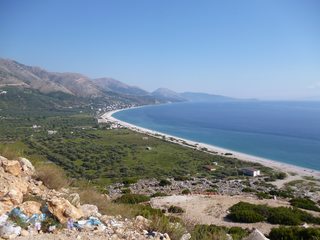 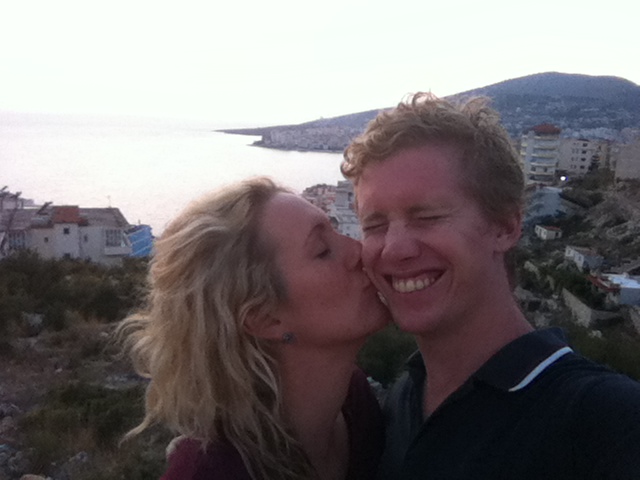 Finally, we ended our stay with a classic sunset from the top of the hill. 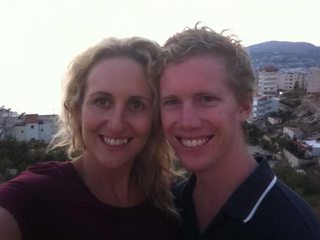 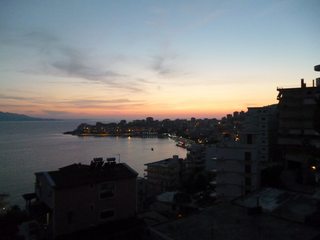 One thought on “Wrong turns and sheep highways – Sarande, the Albanian Riviera”